Among Us was released in 2018, but only recently has it gained popularity among gamers and has become one of the most popular games on the Steam store. The premise of the game is simple: there is an impostor in the crew of the spaceship who must be discovered and exiled before he kills you and your comrades. Read on – here’s how to play this addicting game!

The principle of the game

Despite the modest visual implementation (the game is made in very simple 2D graphics), Among Us became a real hit. Why? It resembles the good old “Mafia”: the goal is to detect and expel a player who deceives and sabotages the work of the crew.

In Among Us you will play the role of an astronaut who is going to be sent on a space mission. You must prepare your ship by performing various jobs and tests in collaboration with other crew members. An impostor is hiding among them, whose task is to kill all the other participants in the mission without being discovered.

Solving this puzzle, you will be able to show both the skills of a detective and a spy : it will be important to pay attention to the behavior of other players, to cooperate with them and at the same time not to trust anyone, because any of the players can be the killer … Including yourself! Below we will tell you more about the rules of the game.

How to play Among Us

Download the game here – the mobile version is completely free! The PC version costs a symbolic $ 5 and can be downloaded from this link . You can play for free on PC using the Android emulator .

After downloading and installing the game on your PC, you can choose between local and online modes. You can also choose whether you want to play with your friends or with random users. If you prefer the second option, click Online and select one of the available servers or games. The games are attended by 4 to 10 players. The games last no more than 10-15 minutes. 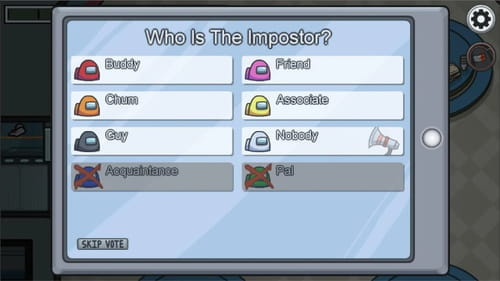 If, as a result of voting, no decision is made to exclude one of the participants, the game will continue; If you choose the alleged killer, this member will be expelled from the spaceship, and only after that you will know if he was an impostor.

How to act if you are an impostor

If you got the role of the killer, you need to pretend that you are performing the tasks of the crew, but in reality try to sabotage the preparation of the ship. In the turmoil and chaos, while others are busy correcting your mistakes, it will be easier for you to eliminate rivals.

You can attack your victims in the compartments of the ship – it is important to close the doors so that no one can see that it was you who committed the crime.

You can now start the game! Good luck!